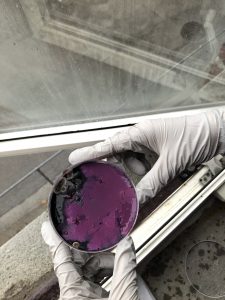 Joel Ong is currently Assistant Professor in Computational Arts and Interim Director of Sensorium: The centre for Digital Art and Technology at York University in Toronto, Canada. Ong is a media artist whose work typically involves artistic and scientific perspectives of the environment expressed through sound, video and interactive elements. His installations and research projects have been shown and presented at various venues around the world. Following his studies in Biology and Ecology at the National University of Singapore, his graduate studies at SymbioticA, the Center of Excellence in Biological Arts at the UWA resulted in a project that merged nanotechnology, tissue culture and sound. He has continued his explorations in the Interdisciplinary Arts through individual and collaborative works with scientists in environmental studies, microbiology and data aesthetics. Ong is an artist with the UCLA ArtSci Collective. More information can be found at www.arkfrequencies.com

The project explores how emerging processes of computational creativity can be an alternative resource for scientific understanding of the environment. Throughout its cultural history, the non-site of the atmosphere defies capture. Through modern science, it has been materialized and politicized, with strata of the atmosphere slowing being overrun by aerial traffic, surveillance agents, electromagnetic signals, organic and inorganic products and other entities that form the backdrop of anthropogenic effects. And this is not all – in what Prescott calls the Synthetic Age, climate geoengineering posits that we may modify our atmosphere through cloud modifications and carbon capture, create an Earth 2.0 that is cooler, and submit to capitalist designs on the commonwealth of air that is in the process of becoming more and more privatized everyday.

His project poses these questions: what if cloud-seeding was not just about organizing particles in the air, but reconfigure the particles in the air itself to hold and reveal genetic stories? What would it say, and how would the wind recast these narratives, activate scenography’s, and be a medium that is the message? How could we effect a sensory revelation of the atmosphere through a previously described hybridity between the arts and the sciences, and yet retain a mythical or transcendentalist quality of the elements?