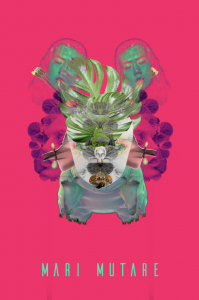 Vanessa Lorenzo is a researcher and trans-disciplinary designer based in Switzerland. Trained as a product design engineer and media designer, she focuses on objects that address intimate interdependencies between humans and the ecologies we are embedded in. Influenced by ethno-fiction, feminist theory and speculative design methology, she creates scenarios embedding people, the more-than-human and the technologies that interweave them in order to enable odd sympathies and post-anthropocentric futures. Vanessa has participated in public events and exhibitions internationally. Furthermore, she developed public workshops that focus on the production of new knowledge through bio-practices, DIY, Open-Source electronics and speculative design methodology. She believes (in) communities of makers/hackers/artists working in alternative spaces have the power to innovate and subvert the dominating role of traditional science and technology.

_Mari Mutare_ is a proposal about interspecies affections and nature cultures in times of ecological and biotechnological transition. From a xenofeminist regard to biohacking practices, this project is inspired by the remarkable persistence of the figure of the Green Man, a foliate head carved into many European churches and present in different temples of cult around the planet. The ornament of the foliate head acknowledges a pagan worship of the natural world highlighting the human-nature dualism and our own vulnerability face to_ vegetal-otherness._ During the residency, the aim is to conceive a human-biocompatible prosthetic that hosts plant cells in order to perform the “ungreening of man”, a deconstruction process of the symbol that embodies a hybrid character that transcends the boundaries beyond categories, species and genre.

Vanessa is a Biofriction artist in residence and takes part in several activities such as the Ars Electronica Garden Barcelona, Paratext, Biofriction Radio, the exhibition of Biofriction.