Gnawing your leg off

We live in a “pharmacopornographic era”, one in which our very capacities of desire and bodily constitution are under the regime of the biomolecular and the semio-technical hormones, the pill, pharmaceuticals, pornography, psychology. This regime is tightly coupled to a juridical one which forces us into a biopolitical identiarian matrix.

Within this matrix transition is framed as simply a movement from one square to another: from male, to female. Recognition under this regime – which simultaneously governs, through insurance contracts, the provision of hormones, surgeries, and therapeutic support – requires one’s behavior to adhere to these categories. “To identify as transgender” is the first step towards another square in this matrix.

Even though sexual identities continuously proliferate, the matrix itself defines the boundaries of the possible. The price we pay for purportedly non-normative gender and sexual behaviors is to remain in these matrices. It is the price we pay for the privilege of transitioning.

To be in this biopolitical identarian matrix also is to feel a bit like the animal who thought they were just discovering a tasty morsel of raw meat and now finds their limb caught in the jaws of the trap. I am in the process of gnawing off my leg to attempt escape, knowing of course that another trap might lay invisible nearby.

Molecular Jouissance in your Second Transition

My first transition had predictable effects: an increase in body hair on the chest, legs, and face. My vocal chords lengthened, deepening my voice, making it sound more quote-unquote masculine. My body odor became more intense. I had a never-ending sex drive, whether I wanted it or not. While I sobbed in private because of depression, this was also coupled with a deep rage that took effort to keep under control.

My second transition began with a combination of a spironolactone pill and estradiol patches. Spironolactone is an anti-androgen which will suppress the body’s natural production of testosterone. The estradiol patches, developed for perimenopausal women, provide exogenous estrogen. Post-pubescent administration of estradiol has the following effects: Body hair growth decreases. Your facial hair remains the same. Skin texture becomes more smooth. Emotionally you feel things you never thought were possible, and the highs and lows become more intense. Your sex drive decreases, possibly to nothing. Fat becomes redistributed to your buttocks and thighs, and your face takes on a more quote-unquote feminine appearance. The pitch of your voice does not change.

The first hit of this cocktail feels like such a letdown; such a list of changes, and no immediate results! But slowly things begin to accumulate, permanently: erections stop being spontaneous and, when they happen, they are extremely painful because of atrophied tissue. Orgasms, which actually require work now, nevertheless are body-shaking intense. Sobbing occurs for no particular reason. Bumping into things with your nipples causes you to wince in pain. Full effect occurs in just a few weeks.

Estradiol is such a simple thing, really, just 44 elements bound together into rings and groups, elements from the exploding stars, from respiring plants, from the remains of expired creatures in the dirt. Today it is bound up with industrial soybean production, as most pharmaceutical steroids are derived from soya sources. The plethora of cascading, bodily, material effects puts to rest any simple discourse about the social construction of the body.

Transdermal absorption of estradiol brings me to a kind of molecular jouissance. Here is a body intoxicated on a molecule; here is a body that would prefer dying to living in the absence of the molecule. 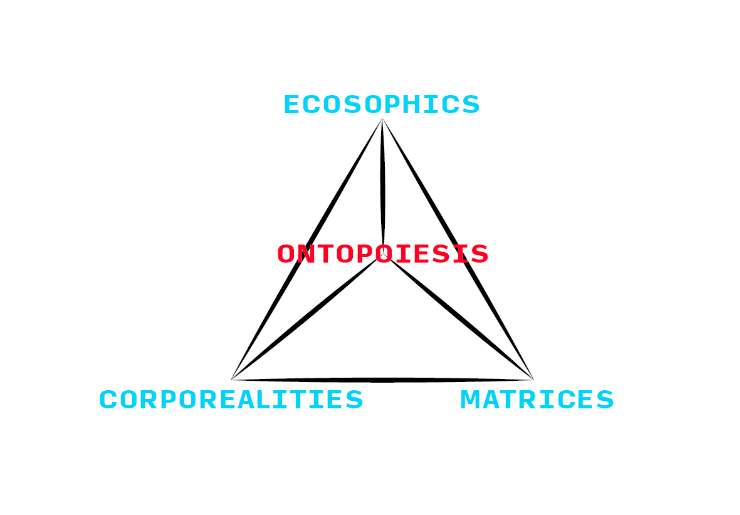 To believe that estradiol has determinate effects on a body, though, is to be caught in the jaws of molecular essentialism: the belief that a molecule functions only within the constraints of an isolated, bounded chemical reaction that is governed solely by the laws of physics. Yet estradiol works on at least three different levels:

This is another trap that I find myself caught in, another matrix that seems to constrain what is possible. Yet it can be through the molecule – as it acts across these three levels – that we can develop new configurations of the body and how the body relates to other entities.

This ability to generate new forms of being I term ontopoiesis: the process of altering the very capacities of being – ontology – through practices of poiesis – making.

The (identarian, juridical, familial, sexual, economic, etc.) matrices we find ourselves caught in nevertheless form the launching point for ontopoiesis. Importantly, ontopoiesis implies a form of experimentation, for we know not yet what being can be. When considered from the perspective of a body marked as transgender, ontopoiesis necessarily involves self-experimentation across levels molecular, biopolitical, and pharmacopornographic.

The alien that I am

It’s the early 1990s. I’m in Iowa, in the middle of the US, in a tiny rural village of 600 people called Badger. Behind my house are the corn fields that stretch to the horizon, their razor sharp leaves acting as a towering sentinel preventing any escape. Or maybe it’s another year: the cash crop soybeans are there instead, low to the ground and spreading in orderly rows like a ground cover.

I’m barely past my 10th year but am beginning to grasp the machinations of the world beyond this supposedly idyllic town. I telematically witness the rapid transformations going on in Europe while simultaneously the US lumbers into the last decade of the millennium through an attack on another sovereign nation.

But this budding political unease about the place I had to call “home” was merely the outward appearance of a discomfort much more fundamental. My home was not Badger, it was not Iowa, it was not the US, it was not Earth; it was, in fact, out there, in space. This I just knew. It had to be true. It was the only way to explain the profound unease I felt amongst my fellow humans, the terrible disconnect I felt within a body marked as a “boy” that I couldn’t understand, all of this occurring within a constraining milieu that would deem me psychologically ill.

So. I would go to the backyard on a moonless night with a neon green flashlight, like those used by the people guiding airplanes to the gate. I pointed it as an infinite vector towards stars I couldn’t see but I knew were there. I turned it on, and off. On. Off. On. Off. This was my beacon. It signaled this: “Come, take me, I am yours, I belong there, with you.”

The voice, however, participates in a different register. There’s no stable understanding of how high or low a voice needs to be to be “heard” as a particular gender.1 As such, the matrix of capture of the voice relies less on determinate scientific boundaries and more on qualitative, tacit understandings.

This is my voice and not my voice.

Now the voice is conceptualized as a stable signifier of identity, something that is so fixed that it can be used to authenticate yourself to a digital system. We expect this stability as we use the voice to make quick determinations of gender: is that a male voice, or a female voice? The ways we do this unconscious ordering involve subtle differences in pitch and resonance of the voice. These comparisons and gradations are not something that we are overtly taught, but rather become solidified through tacit learning.

However this understanding in fact masks another possibility: that the voice is in fact mutable, unstable, and capable of being consciously changed – but only with considerable effort. This fluidity thus conflicts with systems – human, algorithmic – that assume the aural output of a body will remain relatively fixed.

Of course things can be different, and they are different with me. To place myself in a different order meant that I needed to be able to perform a new voice and do this continuously, all day every day, in spoken interactions mundane and profound. I needed extensive vocal training: vocal self-experimentation.

I also needed a list of sentences to practice on, and found, buried deep in transgender discussion forums online, a reference to the Harvard Sentences. Originally written in the 1960s as part of psychoacoustics research, the 720 sentences came to be used for the testing of telecommunications networks, including telephone lines and satellite links. The sentences are a time capsule of white middle-class American life of the time, complete with many misogynistic phrases about women. As I practiced on these sentences, I came to feel an affinity for the absent women being described, and began to alter the sentences to give the women new futurities to live in.

All of this training is required because the estradiol molecule is not omnipotently feminizing. Once someone has gone through male puberty the vocal chords are permanently lengthened, forever lowering the voice–unless explicitly trained otherwise. In this way, vocal self-experimentation is a budding form of ontopoiesis that can set the body onto a new trajectory of being. Through this we can understand that sex and gender are not separate, independent domains, but parallel dimensions that challenge the dualism between nature and culture.