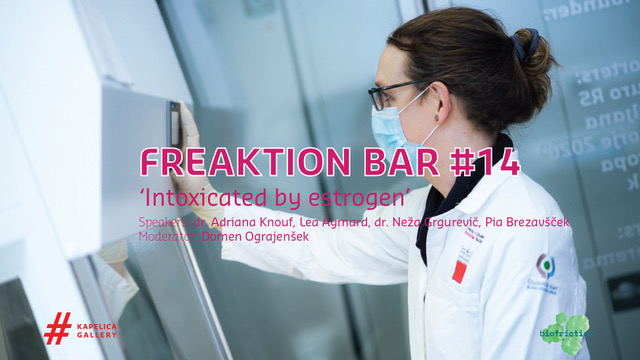 Hormones permeate our bodies, messengers that guide the actions of cellular processes on micro and macro levels. Sex hormones, such as estrogen or testosterone, in particular shape those aspects of ourselves that have customarily been understood as “male” or “female”. This process of sexual differentiation starts within the uterus and later it takes hold in another transition–otherwise known as puberty. For transgender people who undergo hormone replacement therapy (HRT), however, the “natural” distribution of sex hormones can be dramatically changed through the ingestion or absorption of these molecules from sources exterior to the body: a body that once primarily experienced testosterone (and was seen as “male”) now encounters estrogen instead (and may now be seen more as “female”). Thus with HRT a second transition begins: the transformation into an entity that exists as a link between the limits of these sexed domains of male and female.

But this is not simply a disinterested biochemical process. In fact, the practice of HRT can cause a form of “molecular jouissance”, an intoxication that belies the complex processes that bring a body that is in biomolecular fluidity into the social and juridical domains of sex. How can we understand the complicated pleasure provided by hormones without simultaneously reducing their biochemical actions to a form of “molecular essentialism”? How can the real, material effects of hormones on the body be understood alongside the discursive, performative, economic, and informatic aspects of sex-gender?

The discussion will begin with resident artist Adriana Knouf’s experiences on HRT and delve into the early stages of her project Xenological Entanglements. 001: Eromatase, which aims in part to engineer testicular cells that would produce estrogen rather than testosterone, thereby highlighting the potential for the mutability of sex from within. Other guest speakers include transgender activist and camera operator Lea Aymard, expert advisor in steroid hormones Neža Grgurevič, and theorist and theatrologist Pia Brezavšček, while philosopher Domen Ograjenšek will moderate the conversation. The discussion will consider the ways in which biological, personal, and cultural processes intertwine to produce new forms of sex-gender.

Certain topics are so complicated and difficult that they are almost impossible to discuss despite their fatal importance. Some things cannot be captured with our perception and we still haven’t found the right words to describe certain phenomena. We can think about them, but we cannot name them yet. Artists and scientists are often walking into the unknown and trying to reach beyond the borders of possible. Alone, before any of us will follow.

In the club atmosphere at Kersnikova, in a series of informal discussions organized by Kapelica, Rampa and BioTehna, we will meet with extraordinary individuals whose research leads them on the edge of art, science and available technology. We will discuss their work in progress and their disturbing findings. We will tackle the topics that are not for anyone’s ears.

Lea Aymard (she) was born in France in 1980. She was still in high school when she began to study acting at a theatre conservatory and at age 17 she was already part of a theatre group as an actor and theatrical producer. Off stage, she organised workshops in a prison and studied cultural management. In 2006 she moved to Slovenia where she was active in the field of video and (mostly documentary) film as an independent camera operator, director of photography and steadicam operator. She also co-created the production space 303 and was involved both in commercial projects and independent productions. In 2018 she publicly declared her support of trans activism. She currently works at the TransAkcija Institute where she edits the TransTube channel, offers peer support to transgender persons and leads a support group.

Neža Grgurevič holds a PhD in veterinary medicine and is an assistant professor at the Veterinary Faculty and the Faculty of Health Sciences Novo mesto. In 2003, having completed her undergraduate studies at the Veterinary Faculty and doctoral studies in biomedicine, she joined the Veterinary Faculty, where her research has largely focused on the brain and the endocrine system. The main questions she wishes to answer are: Which factors (stress, disorders related to hormone secretion) can cause permanent changes to the brain? How do these factors influence the difference between the male and the female brain? How does this affect the behaviour of adults?

Grgurevič has also been active in the fields of education and psychotherapy. After giving lectures at the Sigmund Freud University in Ljubljana for several years, she is currently a lecturer on physiology at the Faculty of Health Sciences Novo mesto and the Biotechnical Faculty in Ljubljana. She is also a gestalt therapist certified by the European Gestalt Association and the European Association for Psychotherapy, and has been actively involved in the Institute for Family Therapy and the association Konektom, of which she is the president, where she provides psychotherapy and organizes workshops.

Pia Brezavšček is a PhD student of philosophy that explores the subjects in the intersection of philosophy, feminism and broader choreographical practices. She has been active in the field of criticism for over a decade as a contributor to Radio Študent and Dnevnik, and has also published in various journals and expert publications home and abroad. In 2019 she became the co-editor of the contemporary performing arts journal Maska and the online platform for criticism www.neodvisni.art. Winner of the Ksenija Hribar Award for dance criticism and president of the Contemporary Dance Association Slovenia, Brezavšček also participated in several projects as a dramaturge, most recently in Metamorphoses 3: Rhetoric by Bara Kolenc and Atej Tutta and Ideal (M)other, a play about the maternal myth she wrote in cooperation with Saška Rakef and Barbara Krajnc Avdič.

Adriana Knouf (she/her/hers, sie/hir/hirs), Ph.D., works as a xenologist, as an artist-scientist-writer-designer-engineer. She engages with topics such as biological art, space art, radio transmission, non-human encounters, drone flight, queer and trans futurities, the voice, and papermaking. She is the Founding Facilitator of the tranxxeno lab, a nomadic artistic research laboratory that promotes entanglements amongst entities trans and xeno. Adriana is also an Assistant Professor of Art + Design at Northeastern University. Adriana is the author of How Noise Matters to Finance (2016) and other written work on topics like bioart, queer and trans existences, and weird temporalities. She has been selected for a number of prestigious residencies, including a Biofriction residency (SI) and participation in Field_Notes (FI).

Domen Ograjenšek is a writer, curator and art critic. He is a former editor of and regular contributor to Šum – Journal for Contemporary Art Theory and Criticism and has held lectures and seminars on the topics of contemporary art, art theory and pop culture at the Museum for Contemporary Art Metelkova (MSUM), the International Centre for Graphic Arts Ljubljana (MGLC), Gallery Škuc, PhaseBook Prague, and the International Festival of Computer Arts (IFCA).

The discussion is a part of the Biofriction project, which supports “bioart” and biohacker practices and operates as a catalyst for the changes in the relations between science, technology and society. Biofriction is supported by the European Commission – Creative Europe. Special thanks: Institute TransAkcija. Freaktion bar is supported by the Ministry of Culture of the Republic of Slovenia, the Ministry of the Public Administration of the Republic of Slovenia and the Municipality of Ljubljana – Department of Culture.