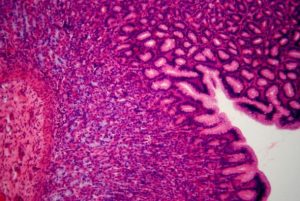 What if we produced the food that we eat from ourselves, i.e. from various cell cultures taken from our bodies, thus minimally burdening the environment in which we live? The artist Theresa Schubert discussed the ethical questions that emerge as a result of biotechnological food production and self-cannibalism, as she, with the help of experts and scientists, produces laboratory meat from her own muscle tissue in her art project. In the relaxed debate that took place in the so-called science café, the artist was joined by Stephen Minger, expert advisor in the field of regenerative cell technologies, and Ariana Barlič, the head of development in the partner company Educell, which deals with stem cells, and an expert co-worker in Theresa Schubert’s project.

Even though food remains one of the prevailing global problems, for the first time in human history the problem is not hunger, but the manner of food production, which has changed radically as a result of new biotechnologies. These changes do not influence merely humans, but have catastrophic consequences for the environment. Animal breeding is one of the largest producers of greenhouse gasses, has a huge impact on the reduction of the biodiversity and is one of the reasons behind the sixth mass extinction of species.

As emphatic animals with moral principles humans have plenty of reasons to stop eating meat. However, as many do not want to give it up, new possibilities for keeping meat on the menu without actually killing animals are emerging. Laboratories and start-ups around the world are competing to be the first to launch affordable burgers made from meat created in a laboratory. Even though we have labelled laboratory produced meat as ethical, the public is usually unaware of the fact that in order to produce artificial meat we still need to use valuable raw materials of animal origin.

The event was reflected in an article on Radio Študent 89,3 MHz.

WHY DON’T WE EAT OURSELVES?