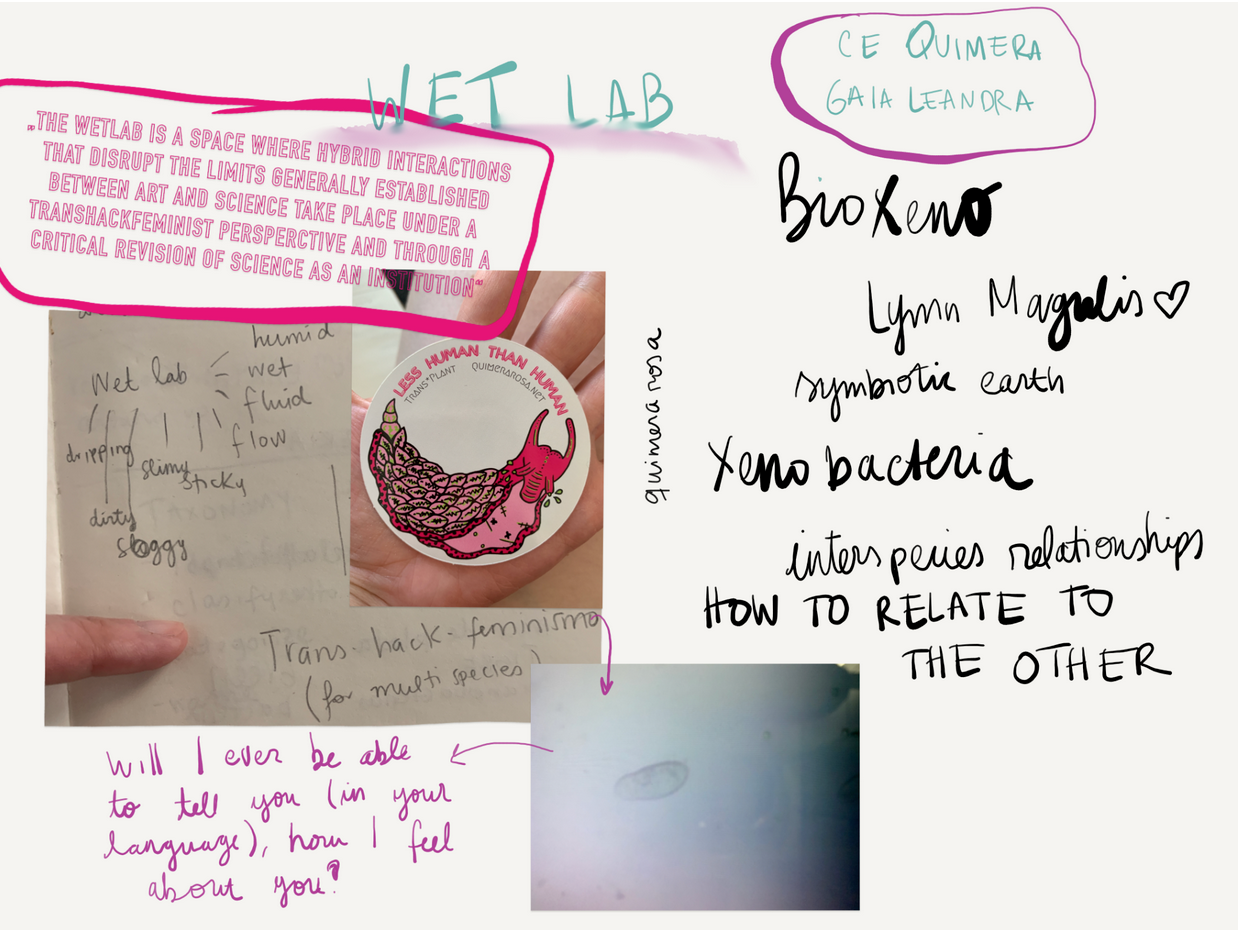 To break the ice and get people to know each other the participants were welcomed with a coffee break in Hangar venue. Afterwards, Laura Benítez Valero did an introduction of the Biofriction project and the Summer Program activities.
In the second part of the morning,  Gaia Leandra and Ce Quimera part of the Wetlab collective introduced the workspace. Thereafter, the artists did an introduction to Bioxeno and the bacterial world in a theoretical and practical way. Indeed, participants collected samples in the park in front of the Hangar.
In the afternoon, participants used the materials to do filtration, pigmentation and recognition of protists in a situated environment.  By using the most classical practices and techniques of science, the Biofriction group generated a collective Atlas situated and subjective.

At the end of the day, each participant learned about microscopy techniques, visual recognition, drawing and scientific/artistic speculation in relation to the bacterial world. 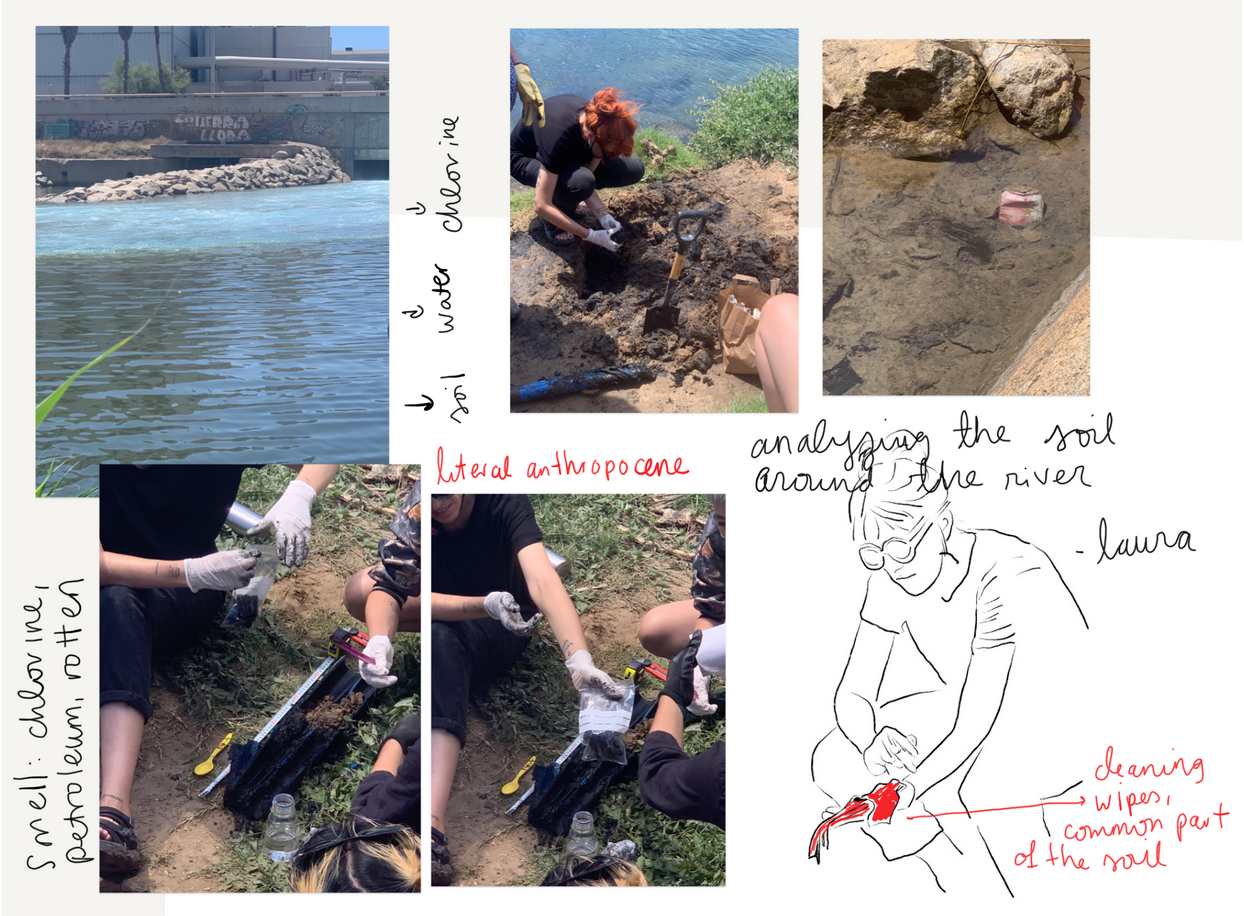 The second day of the Biofriction Summer Program was really an intensive node focused on Radical Ecology with both theoretical, practical and fieldwork of the participants.

During the morning participants had a more theoretical part that was linked to the workshops and activities of the second part of the day.
In fact, participants assisted to a  presentation by Regine Rapp & Christian de Lutz, as part of Art Laboratory of Berlin, and Xose Quiroga, as part of IMVEC.

Art Laboratory of Berlin described the projects of DIY Hack the Panke developed in the last few years. In the afternoon they organized a workshop in which participants carried out a short simple DIY science experiment: making a density column to identify plastic waste by density, using household materials.

Xose Quiroga introduced and presented IMVEC and its regist.ro tool portal. In the late morning, the Biofriction Group went to do an inspection of the mouth of the Besós river during which participants did a sludge extraction that will be carried out for subsequent laboratory analysis and a route around the polluting facilities in the area: combined cycle thermal power plant, waste incinerator, water treatment sludge neutralizer. In addition, some aerial photographs with a picavet structure were explained and used in the park.

After coming back to Hangar participants took part in the two interconnected workshops: the density column experiment to identify plastic waste by density and the session on the construction of the Coqui conductivity of liquids through sonification. 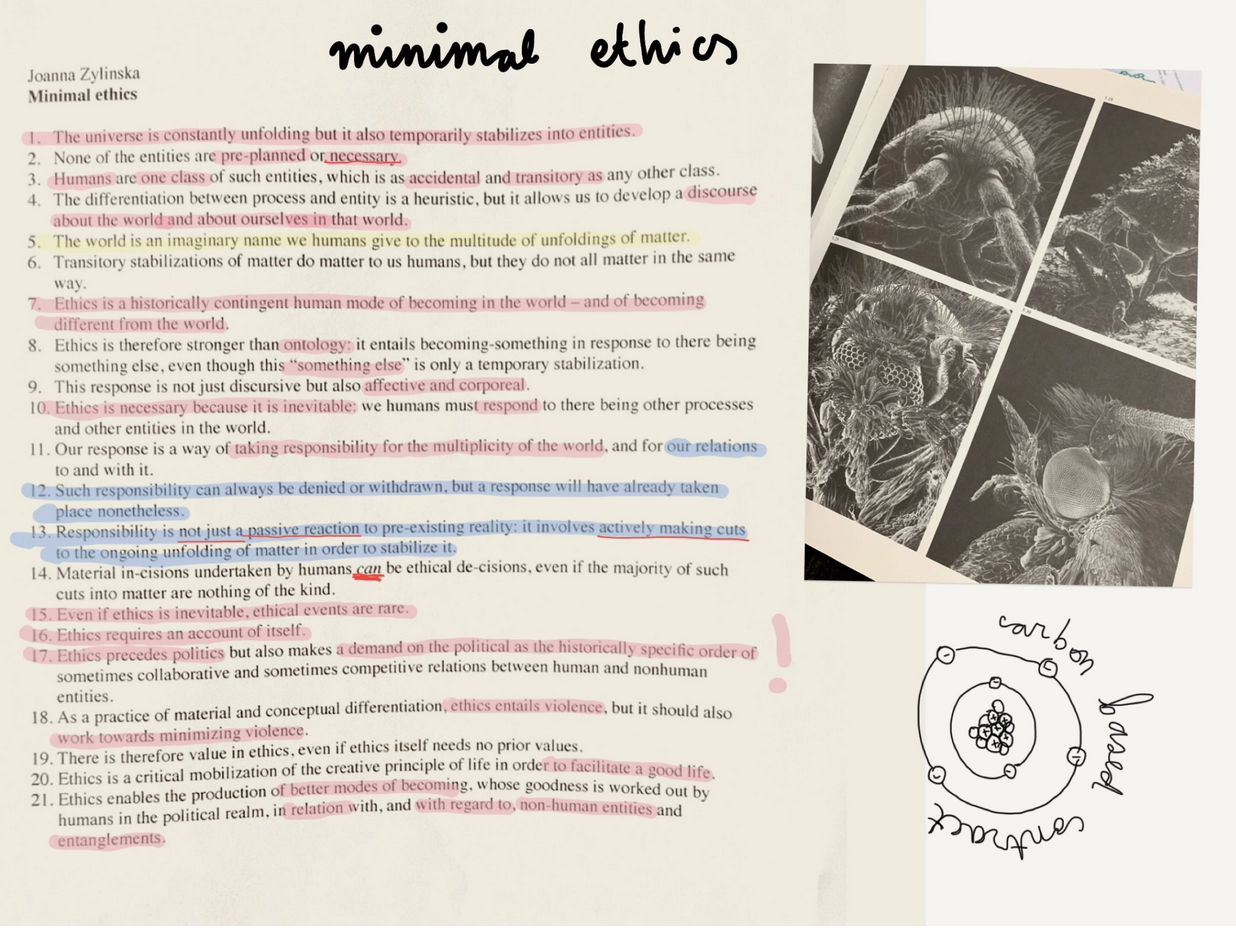 On the third day of the Biofriction Summer Program participants were welcomed with a lecture by Joanna Zylinska about Life, death and extinction: Minimal ethics for the whole universe mediated by Laura Benítez Valero. Joanna’s intervention was first and foremost about life – conceived as both a biological and social phenomenon – it was also a narrative about the impending death of the human population. For instance, it’s also about the extinction of the human species (alongside that of other species), that provides a context for its argument. The aim of Joanna was to take some steps towards, outlining minimal ethics thought on a universal scale. The task of such minimal ethics is to think about how humans can take responsibility for various thickenings of the universe, across different scales, and how they can respond to the tangled mesh of connections and relations unfolding in it. Its goal is not so much to tell us how to live but rather to allow us to rethink and remake “life” and what we can do with it, in whatever time we have left. The talk aims to mobilize a more speculative mode of thinking that is more akin to the artist’s method; it also includes a brief presentation of an accompanying art project.

At the end of the morning, participants shared ideas, discussed what’s the meaning of ethics in relation to humans’ responsibility for various thickenings of the universe and how they can respond to the tangled mesh of connections and relations unfolding in it.

In the afternoon, Arnau Sala Saez did his experimental workshop SHALLOW LISTENING / SONIC UNCONSCIOUSNESS. Participants experienced the practice of listening while taking into account our current social context, technologies and new forms of communication. 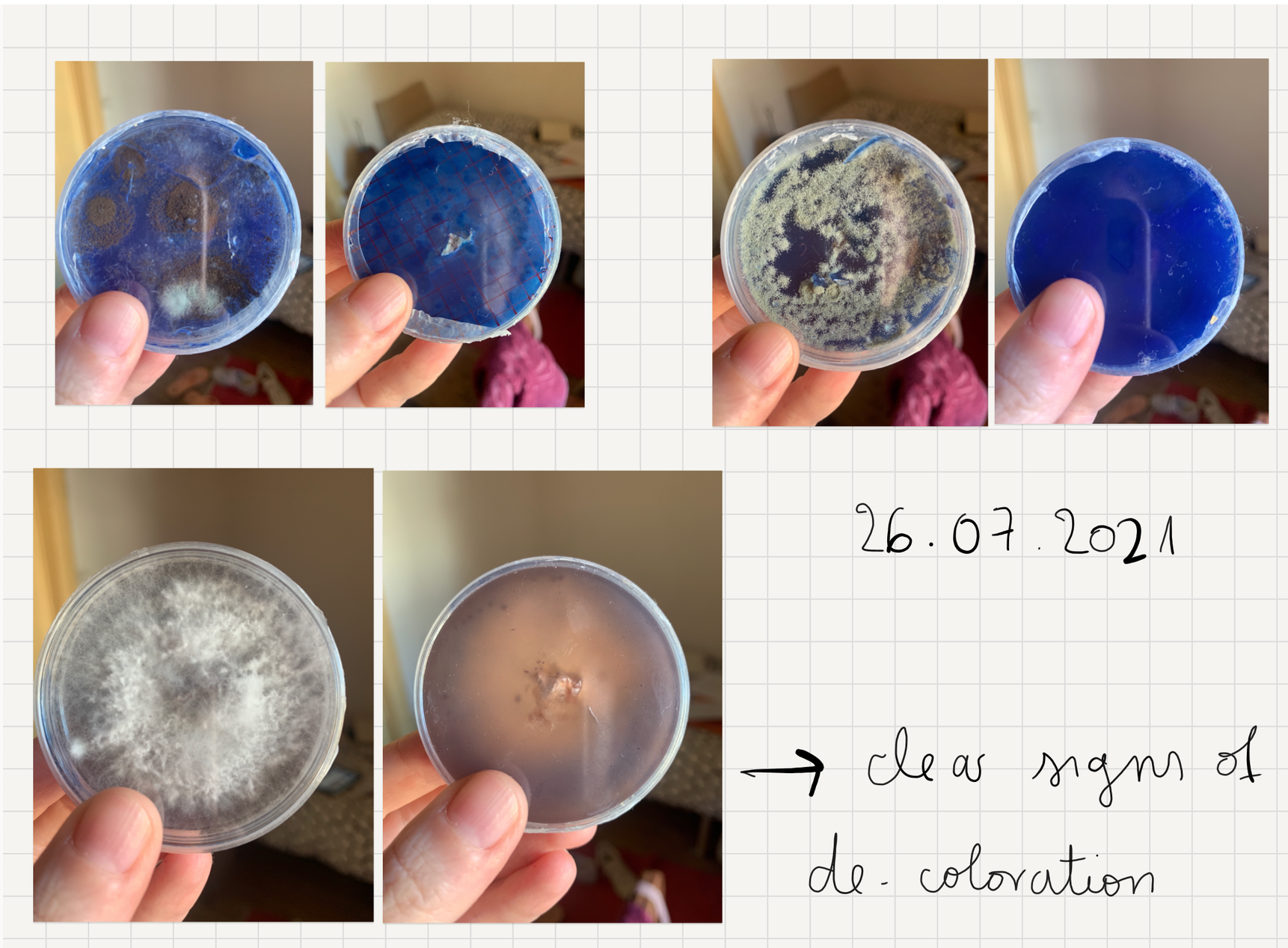 The fourth day of the Biofriction Summer Program focused on (Bio)hacking_with_care.

Participants were welcomed by a presentation by artists Mary Maggic and Paula Pin which explained their practices and shared their personal path that brought them to experiment with biomaterials.

Successively, the artists talked about how our bodies are stolen by capitalist interests and surrounded by pervasive toxicities that affect us.

In the second part of the day, participants used personal products that contain a xenoestrogen ingredient (plastic bottles, cosmetics, soaps, etc) from which they extracted hormones by means of DIY techniques and methanol. During the activity, the group of biofrictioners prepared a xenoestrogen cocktail and inoculated it to the Oyster mushroom. This will be grown on petri dishes stained with Remazol blue, a synthetic fabric dye. The day after, participants checked their growth over time to see how mushrooms respond to the toxic residues of human industrial capitalism.

This workshop was an outcome of a collaborative residency “Prototyp_ome” between Mary Maggic, Rian Hammond, and Paula Pin at Hangar in Barcelona in September 2017.

The fifth day of the Biofriction Summer Program focused on Frictions.
Participants were welcomed by Helen Torres which talked about what does it mean science fiction and what are the challenges in relation to different practices. In the second part of the morning, a conversation between Helen and Possible Bodies took place. The aim of the conversation was to bring up several issues such as: how to expand, density and thicken what’s possible, instead of staying aligned with the deadly reproduction of too probable techno events? How is it that some facts have been solidified rather than others? How to think of fiction as a problem and not only as a potential for radical thinking? To discuss these questions, facilitators provided participants with several inputs and materials. To conclude, they have an intense wrap-up session and discussion.

In the late afternoon, the participants also continue part of the workshop of day 4 #prototyp_ome with Mary Maggic and Paula Pin, to check their xenoestrogen cocktail produced the day before.

The last day of Biofriction Summer Program was focused on the sharing of works, reflections and conclusions about the topics of the week. In the morning, some participants shared their works research, as well as some activities carried out during the Summer School organised by Cultivamos Cultura. (Furthermore, the group talked about ideas for possible future alliances).

In the afternoon, the Biofriction group visited the exhibition Science Friction. Living among companion species at the CCCB where some of the artists who have participated in the Biofriction Summer Program are exhibiting their work.

RESOURCES:
Download or check out the different resources that expand on, or review the topics covered during the Biofriction Summer Program!