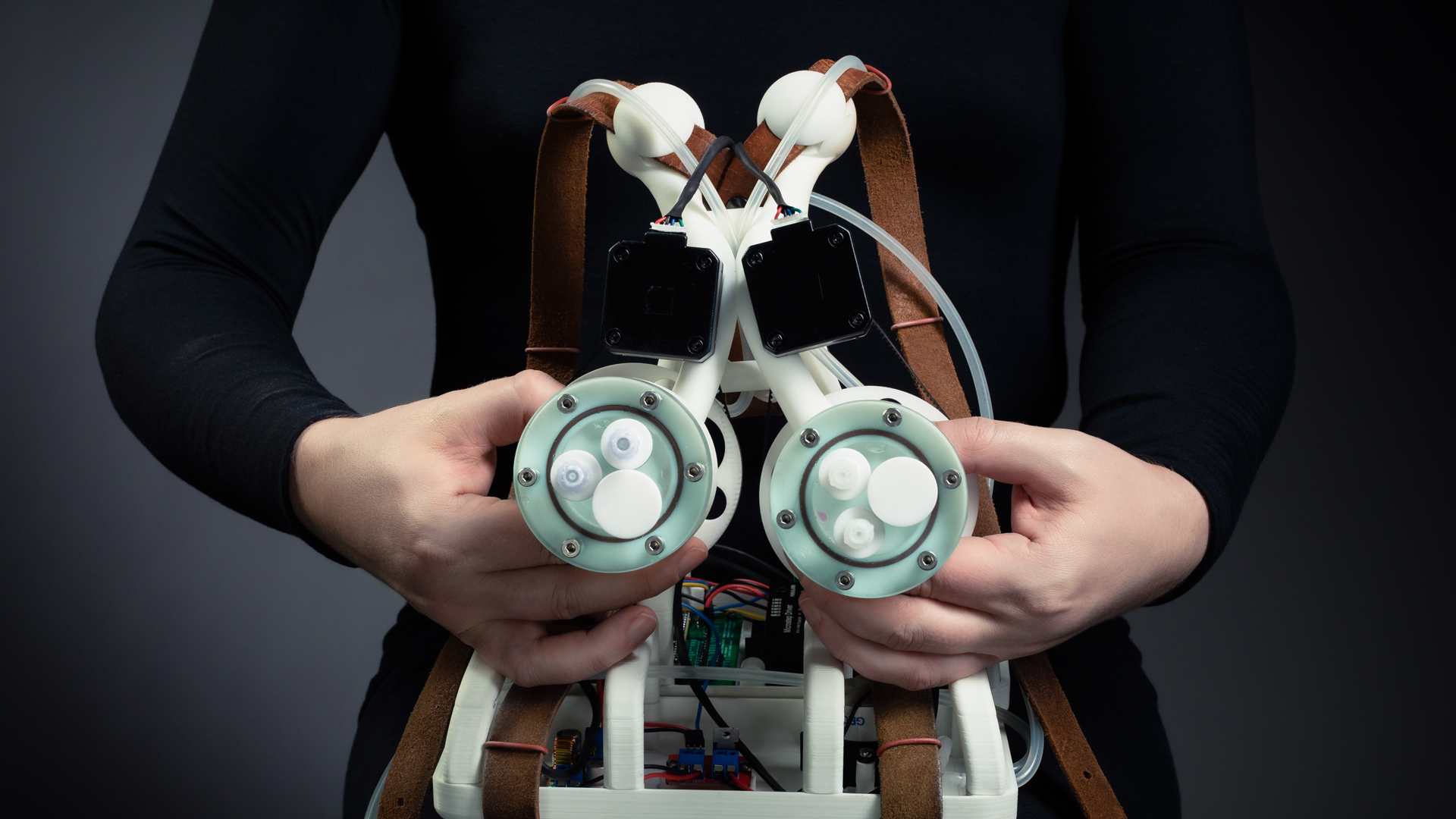 On the 23rd of March 2021 at Zavod Kersnikova in Street Likozarjeva 1, Ljubljana, the inauguration of Saccular Fount a speculative wearable device that suggests a near-term future where personal hormone production is both possible and necessary.

She needs what it provides, badly. She’s intoxicated by the estrogen molecule, a rather simple thing really, yet a compound that has deep biophysical effects in the right concentrations. A molecule that is now being produced just outside her body, in a sacculus, in microgravity, in a simulation of the outer space environment that she wishes to experience.

This fount of estrogen means she is free of the pharmaceutical companies. This fount bypasses the gatekeepers who titrate the molecule to those who fit within the categories they have defined.

Yet she remains burdened by the saccular fount’s weight, its unwieldiness, its entanglements with the non-human entities that are unceremoniously enrolled in her craving for a thriving life. She wishes for something more commensal.

She knows that others may also desire what this saccular fount provides, and thus she opens up its designs for expansion and mutation.

Presented as a speculative wearable device, Saccular Fount suggests a near-term future where personal hormone production is both possible and necessary.

Within growth medium saturated with testosterone, testicular Leydig cells convert this hormone to estradiol using the enzyme aromatase. Thus, cells that come from a part of the body associated with masculinity – the testicles – are induced to produce estradiol – which is associated with femininity. These cells additionally grow in two custom-made rotating wall vessels that simulate a microgravity condition, thereby linking the wearer of Saccular Fount to the potential of weightlessness in outer space and the possibility of sourcing hormones for long-duration space missions.

Saccular Fount is worn in the center of the torso, between the breasts, and hangs on a custom-made leather harness. This harness both constricts the body and suspends the device, highlighting a particular tension between the molecular jouissance induced by estradiol in transgender bodies as well as the constraints in how these (and other) bodies are seen in society.

Given challenges in access to hormones for people on various kinds of hormone replacement therapy (including transgender or perimenopausal people), Saccular Fount additionally gestures towards another means of hormone production separate from pharmaceutical companies. Yet this very production relies on cells sourced from non-human mammals, and thus the additional materials used in the piece – leather, pig intestines – palpably foregrounds these concerns.

Adriana Knouf, Ph.D., works as a xenologist, as an artist-scientist-writer-designer-engineer. She engages with topics such as biological art, space art, radio transmission, non-human encounters, drone flight, queer and trans futurities, the voice, and papermaking. She is the Founding Facilitator of the tranxxenolab, a nomadic artistic research laboratory that promotes entanglements amongst entities trans and xeno. Adriana is also an Assistant Professor of Art + Design at Northeastern University. Adriana is the author of How Noise Matters to Finance (2016) and other written work on topics like bioart, queer and trans existences, and weird temporalities. She has been selected for a number of prestigious residencies, including a Biofriction residency (SI) and participation in Field_Notes (FI).

The project was realized during the artistic residency in the framework of Biofriction, a Creative Europe research project, which focuses on generating spaces for transdisciplinary exchanges and experimental proposals.